This is a high resolution scan of an original rubbing of the Suzhou Planisphere, which is believed to be the only original rubbing of it in the West. It is in the Foundation’s collection and was acquired at the Purple Mountain Observatory in Nanjing in the 1990s. The Chinese Government at that time authorised ten rubbings to be made from the carved stone, and the other nine went to Chinese museums and institutions, leaving only one available for private sale. The planisphere was originally drawn in the year 1193, and was engraved on a stone stela in 1247. That stela is now preserved at the Purple Mountain Observatory, and it is there that the rubbing of it was made. The planisphere was reproduced and discussed in a rare book entitled The Soochow Astronomical Chart, by W. Carl Rufus and Hsing-Chih Tien, University of Michigan Press, Ann Arbor, Michigan, USA, 1945. A copy of this book is in the Foundation’s library. In 1945, the stela was still located at Suzhou (‘Soochow’ in the old spelling) and had not yet been moved to Purple Mountain. However, the stela continues to be known as the ‘Suzhou’ planisphere, or astronomical chart. It was Joseph Needham who classified the chart as a ‘planisphere’, since which time that term has been adopted for it. Needham used the older spelling of Suchow, which is however newer than the spelling ‘Soochow’ used by Rufus and Tien. Suzhou is the modern spelling using the Mainland Chinese Pinyin system of transliteration.

Rufus and Tien in their 1945 book published an English translation of the full text inscribed on the stela, together with an extensive astronomical analysis. Joseph Needham’s discussion of the planisphere is to be found in Volume 3 of Science and Civilisation in China (Cambridge University Press, 1959), pages 278-9, 281, and 550. The main discussion is found in the Astronomy section of that volume, and a reproduction of the planisphere itself, but without its accompanying text, appears as Figure 106 on page 280. (Needham took his illustration from a reproduction of the illustration appearing in Rufus and Tien’s book, so it is less clear than theirs.) Needham points out that the name of the astronomer who drew the planisphere was Hung Shang, and that the carving of it onto stone 54 years later was done by Wang Chih-Yuan (Wang Zhiyuan). By putting the planisphere onto stone, the intention was to preserve it for the distant future, and that is indeed what has happened. The original drawing was lost centuries ago.

The text of the planisphere states that 1565 named stars are known, but only 1440 of them are actually depicted. The representations of the planets have an astrological rather than an astronomical purpose.

The main text on the stela commences in this manner:

The lengthy and detailed text preserved on the stela is an extraordinary major work of Chinese philosophy and early science. The Foundation’s studies of ancient Chinese astronomy will recur to it again, as the Foundation is undertaking an extensive and prolonged programme of explanation, study and analysis in this field. Previously unpublished star maps will feature in the discussion and analysis and be posted on the website, and these will be regularly compared to the Suzhou planisphere.

A very great deal of additional material on ancient Chinese astronomy will be continuously added to the website, and this will include enlarged image details of the Suzhou planisphere and many other Chinese star maps which are unknown to modern scholars.

The Kui Xing Scroll in the Foundation’s collection is a large coloured scroll rubbing of a stone depiction and text from an unknown source, in a temple which may well no longer exist. A full analysis of the text has not yet been attempted, but the Foundation is putting the image online to enable scholars to examine it for themselves and come up with their own conclusions. The two characters at the top of the image say ‘KUI XING’ (which means ‘chief stars’). That is the name given to the group of four stars forming part of the northern polar constellation, often called the Big Dipper, though also known in the West as the Great Bear, or Ursa Major. The Big Dipper is traditionally depicted on Chinese star maps in a recognisably dipper-shaped configuration constituted of seven stars. This may be clearly seen in the Suzhou Planisphere, which is also reproduced on this website (see the bottom of the central circle of the planisphere depiction). In this scroll, the seven stars of the Big Dipper are depicted without any attempt to portray them in their true shape in the sky. Instead, they are shown as two strings of three with a seventh to the side, all linked by a connecting line. The characters in the five seals are faint and difficult to make out. The strange animalistic shape in the centre with two ‘eyes’ apparently made of stars is enigmatic. Kui Xing was eventually transformed by the Daoists into a celestial figure of a man, and revered in traditional temples as a semi-deity or saint. He is often depicted as a man, though not in this scroll. He also became known as Great Kui the Star Prince. The date of the stone carving of which this scroll is a rubbing is unknown, but it is possible that it predates the Ming Dynasty’s enthusiasm for portraying Kui Xing as a man. A full analysis of the text, of the mythology of Kui Xing, and of the dates of transformation of the four stars into a man, would constitute a useful subject for research. 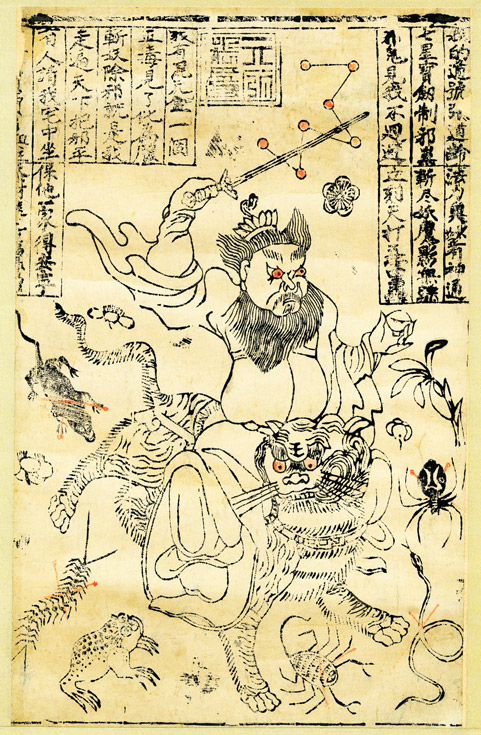 This old bi-coloured print of unknown date shows ‘Celestial Master Zhang’, or Zhang Daoling, one of the early Daoist masters of the Eastern Han period, riding through the sky on a celestial tiger bearing on its brow the character wang, meaning ‘king’.  Zhang brandishes a sword entwined with the seven stars of the polar constellation of the Big Dipper (Great Bear, Ursa Major). Zhang is quoted as saying (paraphrased): ‘If someone invites me to his house, I bring him peace. I travel round the world to expel devils and monsters. It is I who wipe out the devils. The devils and monsters turn into carrion. I have a sword, a seven-star sword to kill demons. My name is Zhang Daoling. I have supernatural powers to exterminate evil.’ As he rides through the sky, we can see the blazing-eyed Daoist hero surrounded by pestilential creatures such as a serpent, a scorpion, a spider, a Chinese alligator (once common, but now a rare creature in the wild, though there are thousands in captivity), and a toad, representing the monsters and demons whom he slays in his merciless war on evil. This image is included under ‘Astronomy’ because of its use of the Big Dipper stars.